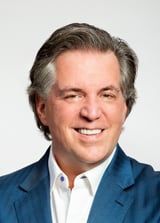 Bill founded AlphaTrust Corporation in 1998 to capitalize on a sustained, long-term shift from paper-based document processes to fully electronic document processes. A noted entrepreneur, Bill is considered one of the industry “pioneers” and is a leading authority on electronic signatures especially around generating real economic impact and brand enhancement.  Bill has served as Chairman of the Board for the Electronic Signature and Records Association and is currently a member of the Board of Directors.

Bill began his entrepreneurial career while in college by co-founding Brice Foods. As Chairman and CEO, he grew the company into a global enterprise best known for its chain of “I Can’t Believe It’s Yogurt!” frozen yogurt stores. This company grew to 1,500 franchise locations in 43 countries, with manufacturing operations on four continents.  For his work, Bill received the Entrepreneur of the Year award from the International Franchise Association (IFA), which is the world's oldest and largest organization representing franchising worldwide.